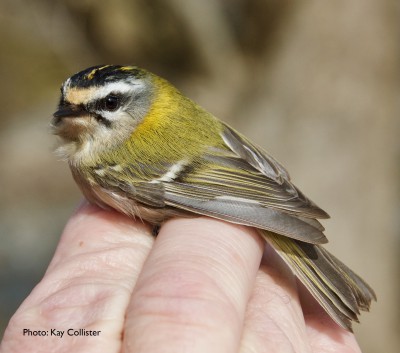 All nets opened at 0500 and closed at 1100. Another quiet day with just 25 new birds of 11 species, including three Long-tailed Tit.

It pays to keep going though, as the last bird caught on the last round as we closed was a Firecrest, the 6th ever for the Station, all but one of which were in the spring. Given the increased numbers of the species caught at Stations further south, it was hoped we would get one this year – a ringing tick for Kay!!

An extra public guiding was given for nine adults at 1130, it is not many people whose first bird seen in the hand is a Firecrest – all were suitably impressed!!

Apart from end of week summaries and cash reconciliation we are taking the rest of the day off!!!